Innovating science
for over 130 years

They Call It Atomic Cleanliness

Plasma cleaning is low cost, easy to do, and safer for operators. Learn how to find the best mix of features for your lab’s application in this guide. 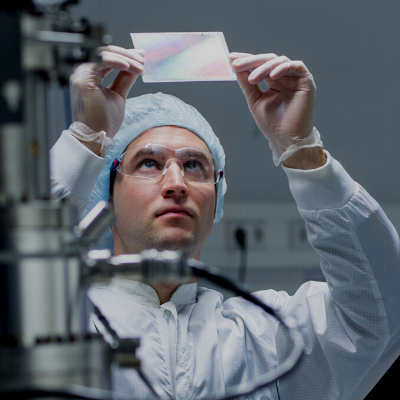 How much does your lab spend on solvents for cleaning surfaces of semiconductors or solar cells, medical device parts or similar items? What about disposal of those solvents?

That’s the first way plasma cleaning helps your lab. There are no solvents. There’s no solvent disposal. So the cost and logistics surrounding that are immediately eliminated.

Plus, it’s one of those really cool sounding things you can tell your family about at the end of the day. No big deal, just worked with the plasma cleaner all day achieving atomic cleanliness that no other process can match. Really, no big deal.

Plasma cleaning uses an ionized gas to interact with a substrate to remove contamination and/or modify its surface..

Plasma cleaning technology offers solutions for any type of contamination, for any substrate. In the cleaning process, molecular level contamination residues are removed from a surface by a dry method of turning the foreign materials into a gas.

This process of changing the state of a solid or smearable liquid into a gas without exposing the part to a liquid is preferred over standard cleaning methods in lots of applications.

With a plasma cleaner there are virtually no limitations for materials that can be treated. Polymers, metals, rubbers, ceramics and glass are equally suitable for plasma cleaning. It is safer, environmentally friendly, and more effective than traditional wet chemical cleaning procedures.

So, to equip you for impressive stories over dinner with your family, and to learn the right mix of features and value for your lab’s new plasma cleaner, dig into the info below.

What the heck is a plasma cleaner anyway?

At one point or another, every surface is contaminated.

Not always in the obvious way the surface of the dive bar you loved in college or university was, or the finger holes in the bowling balls at your nearest bowling alley are, or fur of your kid’s favorite stuffy.

The surfaces you spend your time with in the lab are covered in invisible contamination that gets in the way of your process – whether it’s for quality control or production or adhesion or something else.

You work in the lab, so you’re probably pretty informed about this already. But these contaminants must be removed as a first step to producing faultless adhesion between surfaces when working in the application of gluing, printing, painting, bonding, or coating. They must be removed when you’re doing research and development on printed circuit boards, or solar panels. They have to be removed from your electron microscopy grids.

How does it do the cleaning?

Plasma cleaning removes organic contaminants by chemical reaction (O2 or air plasma) or physical ablation (Ar plasma). What’s probably coolest about it is that it doesn’t require any hazardous wet chemicals. Yes, there are chemicals involved in the process. But it isn’t like spraying a blast of bleach on the surface.

Plasma cleaning also involves the removal of impurities and contaminants from surfaces through the use of energized plasma created from gaseous species. Gasses such as argon and oxygen are used, as well as mixtures such as air and hydrogen / nitrogen.

In plasma, gas atoms are excited to higher energy states and also ionized. As the atoms and molecules ‘relax’ to their normal lower energy states, they release a photon of light which results in the glow or light associated with plasma. Different mixtures of process gases give different colors. For example, oxygen plasma emits a light blue color whereas an oxygen / argon mixture is pink.

Plasma cleaning goes a little differently depending on what you need cleaned. There are a handful of different ways to look at it. Starting with…

Oxygen-Based Plasma Cleaning. Oxygen (O2) plasma reacts with carbon and hydrogen molecules in a hydrocarbon-based contaminant on the surface of the thing you need to clean. The contaminant becomes a gas, and no longer adheres to the surface.

Hydrogen-Based Plasma Cleaning. Hydrogen plasma (H2) is a mighty reducing agent. Hydrogen plasma is most commonly used to clean or reduce oxides from the surface of metals or bulk oxide films.

Argon-Based Plasma Cleaning. Argon (Ar) is not chemically reactive, unlike oxygen and hydrogen. But the comparatively heavy argon ions generated in the plasma system have a lot of energy and exercise a sandblasting effect (although much, much gentler than actual sand blasting) where they hit the surface. Argon plasma alone or in combination with other gases can speed up other manufacturing       processes.

But wait. Does that really tell you how the cleaning works? There are more specific processes that you might be more familiar with. Four of them, to be specific. So when your plasma cleaner is doing its thing, one or a combination of these processes is getting your surfaces clean and preparing it for your application.

Surface contaminants undergo repetitive chain scission. Slowly, the molecular weight is reduced and they boil away in the vacuum.

Ablation affects only the contaminant layers and the outermost molecular layers of the substrate material.

Plasma surface activation involves the creation of surface chemical functional groups through the use of plasma which dissociate and react with the surface. Like infiltrating a political party with spies to take over!

In the case of polymers, surface activation involves the replacement of surface polymer groups with chemical groups from the plasma gas. The plasma breaks down weak surface bonds in the polymer and replaces them with highly reactive carbonyl, carboxyl, and hydroxyl groups.

Cross-linking sets up chemical links between the molecular chains of polymers. Like the bricks in the Great Wall of China.

Plasma processing with inert gases can be used to cross-link polymers and produce a stronger and harder substrate surface.

In some cases, cross-linking through plasma treatment can also add chemical resistance to a material.

Plasma deposition involves the formation of a thin polymer coating at the substrate surface through polymerization of the process gas.

The deposited thin coatings can possess various properties or physical characteristics, depending on the specific gas and process parameters selected.

Such coatings exhibit a higher degree of crosslinking and much stronger adherence to the substrate in comparison to films derived from conventional polymerization.

Not only can plasma cleaners undergo all the processes mentioned, they can also ensure maximum sterility while doing so.

Get a copy of the guide here

Basic technical specs to look for from your manufacturer

Based on the type of plasma cleaner you need, specifications may differ.

The table below summarizes the most important features and benchmarks you can apply to your lab.

Of course, different applications call for more specific, unique, and refined specifications. Yamato Scientific America designs and manufactures plasma cleaners for dozens of applications. You can find the applications below, or get in touch to talk about your application with a specialist who can help you find the right combination of features.

Where are plasma cleaners most commonly used?

Plasma cleaners are used in the lab, on the manufacturing floor, and in quality control for the applications below.

Automotive: Plasma cleaning is used for surface preparation prior to the application of a sealant, adhesive, or coating. This is an environmentally friendly, high volume, low takt time process.

Aerospace: Plasma cleaning can produce ultra-clean surfaces in propellant and oxidizer valving, pumping, and other hardware before assembly. That’s just the start. There are hundreds of plasma cleaning applications in the aerospace industry.

Consumer goods: Anywhere polymer and composite components need to be stuck together in consumer goods, plasma cleaning is used.

Medical devices: Medical devices need plasma cleaning more, perhaps, than any other device. Trace level contaminants in the micro-structures or fine cracks of a surface are removed, providing a clean surface free of foreign material, contamination, and pyrogens.

Solar: As with semiconductors, bond pads and conductive materials are cleaned for improved conductivity and reliability.

Textiles: Plasma cleaning and activation gets rid of manufacturing contamination from textiles to improve coating durability and performance life.

Rubber processors: Removal of mold release and lubricants prior to gluing or bonding.

Plasma cleaners have a wide range of applications and are useful for several fields affecting both daily life and medical advancements.

From helping in biomedical research to aiding in semiconductor technology, plasma cleaners are modern pieces of equipment that can greatly increase productivity and innovation.

So why use plasma cleaning instead of some other process?

There are plenty of processes you can use to get contamination off your surface. Heck, you’re a scientist – you can probably dream one up yourself.

But there are a handful of reasons plama cleaners are the preferred choice for applications like yours:

Plasma treatment occurs at near-ambient temperature, so there’s no risk of damage to heat-sensitive materials.

It also only affects the near surface of a material; it doesn’t change bulk material properties.

With different gasses and configurations, you can clean, activate, sterilize, and toy with surface characteristics.

Plasma will react with a wide variety of materials, so it can treat assemblies made of different materials.

It’s also highly reproducible. Put it up against your chemical or mechanical process and it will outperform them 9 times out of 10.

Processing times are short and the energy consumed is remarkably low. And yield loss due to heat or solvent damage is equally low.

There are no complicated chemical analysis steps. No challenging maintenance. No wear and tear on the equipment as each process plays out.

How much money does your lab spend on solvents for cleaning? The cost can be completely eliminated (disposal costs too) by choosing plasma cleaning.

There’s no exposure to harmful chemicals.

The process happens within a vacuum chamber, so there’s almost no direct operator exposure.

Plasma processing operates at near-ambient temperature, so nobody’s going to burn a finger.

Get your copy here 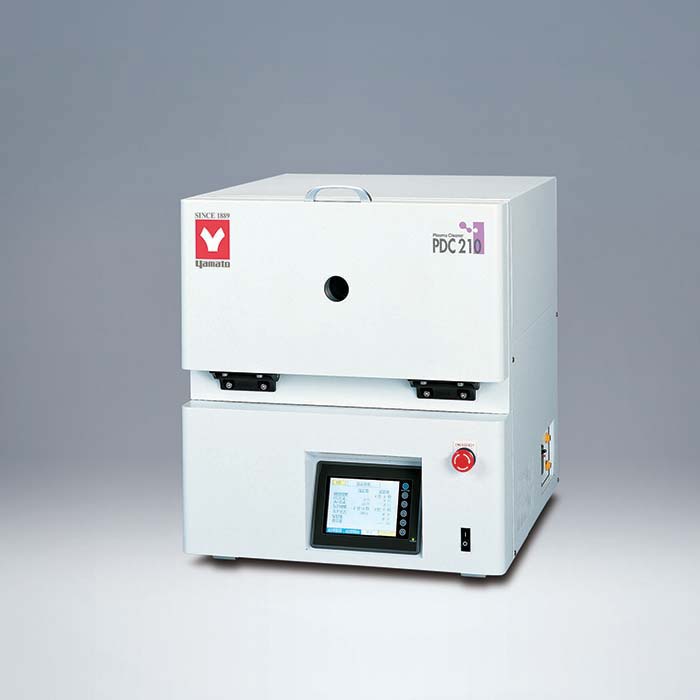 Give plasma cleaning a try in your application

Plasma cleaners offer contamination removal like no other piece of equipment available. Its low cost, ease of use, environmental safety, and sterilization efficiency are unmatched.

Plasma cleaners can be used in a wide variety of fields. From tissue engineering to solar conducting, plasma cleaners are the jacks of all trades. Although you wouldn’t use it to clean your kid’s favorite toy, you could. Maybe if you work late one night…

If your lab could use a little budget pressure relief, and you wouldn’t mind doing away with solvents used for cleaning, get a quote on your lab’s next plasma cleaner from Yamato Scientific America. They’re engineered to give you everything this guide lays out.

Whether you’re considering getting your first rotary evaporator or perhaps upgrading your current system, Yamato is here to walk you through all the critical decisions you need to make when selecting the right system for your lab with our in-depth buyer’s guide. Download Yamato’s Rotary Evaporator Selection Guide for FREE now.

TELL ME WHAT I NEED TO KNOW

Confused by All The Autoclave
Options Out There?
We Did The Research So You Don’t Have To!

Our team of experts has joined forces to bring you a comprehensive guide on how to shop for that perfect autoclave. Get access to tips for planning ahead, a checklist of utilities you’ll need, a breakdown of common features and configurations, and more.

TELL ME WHAT I NEED TO KNOW

Get Your Hands on our FREE Spray Dryer Selection Guide Today!

Getting the best quality spray dried products starts with choosing a spray dryer that is compatible with your samples. Get tips on proper sample evaluation, detailed product comparisons, and find out where you can get a free spray dryer consultation. Just fill out the form below and we’ll email you a copy of our guide “Sample Determination for Spray Drying”, absolutely FREE!